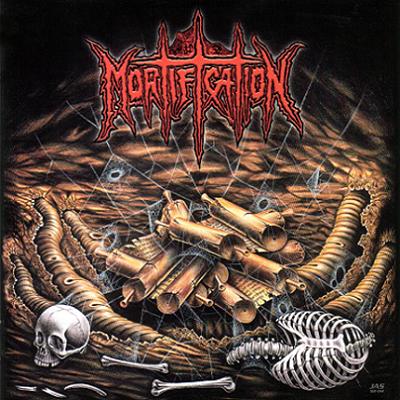 Scrolls Of The Megilloth (silver VINYL)

As the 300 transparent blood red vinyl from 2016 have sold out, and the 250 ochre vinyl from 2018 have almost sold out, we are now making 300 copies of “Scrolls Of The Megilloth” available on silver vinyl!

With releases on label giants like Nuclear Blast and Metal Blade, albums which are considered classics, world tours and a sound that is constantly being reinvented – having delved into death metal, grind, thrash, power metal, groove metal, classic metal and even a touch of punk – Mortification is a band that cannot be put in a box. They are the undisputed pioneers of Christian death/thrash metal and Australia’s most successful metal band.

Soundmass has gone back to the early years – releasing Mortification’s 1992 album “Scrolls Of The Megilloth” on VINYL. Hailed by many as the band’s finest hour, this album sees them perfecting a brutal death/grind style that has stood the test of time, even 24 years after its initial release. In talking of the classics of death metal, “Scrolls Of The Megilloth” is one of those albums that always seems to get mentioned. Heavy, downtuned, fast, chaotic, technical – an extreme metal onslaught with street level credibility. Remastered for vinyl and with enhanced original cover art and an insert containing lyrics, credits and band photos, this is a must for any fan of death metal and any long-time Mortification fan.

Side B
Lymphosarcoma
Scrolls Of The Megilloth
Death Requiem
Necromanicide
Inflamed