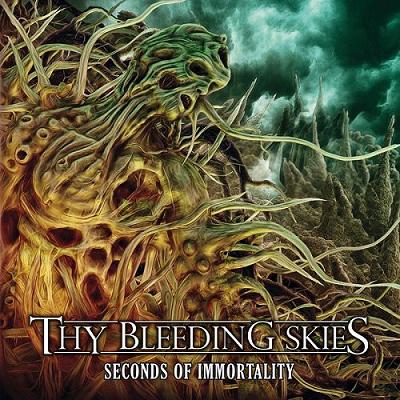 Soundmass is pleased to announce the release of THY BLEEDING SKIES: Seconds Of Immortality.

The 3rd album from this German band sees them push the limits of modern death metal. Using a foundation of melodic death metal, Thy Bleeding Skies blend in doom and rock ’n’ roll influences and a touch of the old-school. The metal never lets up, but the band have added some electronic parts and clean vocals to create their most diverse and exciting album yet.

Formed in 2006 by frontman Claudio Enzler (Sacrificium, My Darkest Hate), Thy Bleeding Skies have already released two albums – “Chapters Of Downfall” (Dark Balance 2.08) and “Autumn Souls” (Whirlwind Records 2.11) – and toured throughout Europe. “Seconds Of Immortality” was primarily recorded and produced by guitarist Wolfgang Nillies (Might Of Lilith, Sacrificium) in Finger Print Studio, Stuttgart, with the drumming of Janne-Jusse Kontoniemi (Deuteronomium) tracked at Noise Floor Studio in Helsinki by Mikko Herranen.

TRACK LISTING:
A Second Of Immortality
Simple Excuse
Without Reason
Disciples Of Digital Dawn
Echotron
The Evidence
Cracked Frozen Shell
Eyes Of October
When Dreams Are Frozen In Time
Prison Of Lies
Deprivation Of Humanity
Doomed To Cry