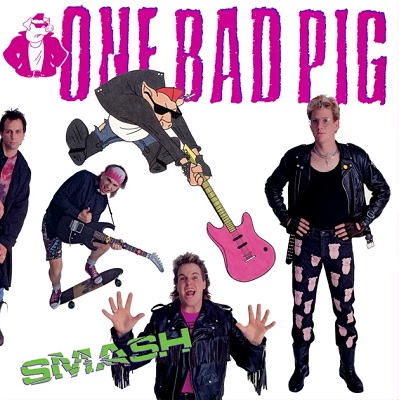 “One Bad Pig started out as a novelty act that eventually transcended the limitations of their satirical orientation to achieve cult status as a legitimate band. Indeed, the group is quite possibly the most popular hard-punk act ever to arise within the Christian music scene. Although they became known as a party band, as famous for their stage antics as for their music, the group had a very serious focus on ministry. Smash was the band’s debut full-length album that released in 1989 on the most important record label of the 80’s to all Christian hard rock fans – Pure Metal Records! Produced by a young Billy Smiley of WhiteHeart fame, the band broke down all preconceived notions of what could be done with rock, punk and metal and it was all rolled up into one amazing, succulent spicy pork roll! And while Motorhead and the Sex Pistols might have been promoting anarchy in the UK, One Bad Pig branded their own live-in-concert chaos, with the song “Smash” and its legendary chorus “Smash, smash, smash the guitar” being a staple hard rock anthem in any self-respecting hard rock and metal fan’s repertoire. The importance of Smash’s impact on the Christian hard music scene was highlighted by the album’s inclusion on HM Magazine’s Top 100 Christian Rock Albums Of All-Time. Smash is full of hard rock anthems that have only grown more impressive with time, and bold lyrics that touch on the heart of the human experience. No one dominated a live show like One Bad Pig and that’s because they are elite musicians whose love for God is something they longed to share with the world. This album embodies all that passion and youthful energy and it’s something to behold, to experience and to absorb. For OBP fans, this is your chance to get a classic album remastered and better than ever. For those who never gave Smash a chance back in the day… this is your chance to jump into the pig pit of fun!” -Girder Records