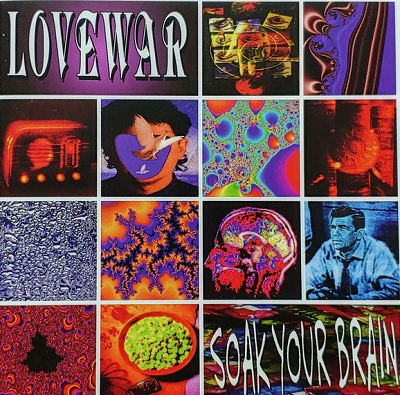 “Tim Bushong, Greg Purlee and Rick Armstrong released Soak Your Brain in 1993 on Pakaderm Records. It just might possibly be the world’s most underrated Christian rock album. HM Magazine ranked this album at #47 on the greatest Christian albums of all time. That should tell you something. Yet, Lovewar was short-lived as Tim Bushong went on to form The Channel Surfers. Somehow John and Dino Elefante (producers) saw something. After all, their entire existence as producers and record label execs proved success as they had their finger of the pulse of what fans wanted. From Petra, Guardian, The Brave and many others they found the IT factors and Lovewar was no exception. Back in the day, they were labeled as the Christian answer to Pearl Jam or Nirvana, as grunge was dominating music in the early 90’s when this album dropped. Thing is… Lovewar sounds nothing like Pearl Jam, Nirvana, Soundgarden or any of those grunge bands. Not even remotely! Lovewar is a 3-piece melodic hard rock band very much in the vein of Extreme, with hints of Mr. Big, King’s X, Galactic Cowboys and eventual label-mates Guardian thrown into the mix. Tight vocal harmonies, big guitar hooks, intricate bass rhythms and strong song crafting are the key elements of this band, with catchy melodies sticking in your head for days and insightful lyrics requiring a degree of thought. The truth is that this is prog metal and Guardian-like with big hooks and serious guitar chops. It’s clean. It’s fun. It’s prog mtal at its finest with a great mix of metal, funk, jazz, grove and fusion with lots of starts, stops and time changes but with a little bit more flash and pop that on a King’s X album. The guitars are crunchy and precise, the bass is dominant and thick and almost worth the price of admission if not for the talent of the rest of the band. The drums are a great mix of jazz and funk and the lead vocals and harmonies are very catchy. Overall, the songs are very well put together tight and infectious. Tim Bushong claims to have been influenced by popular writers like Francis Schaeffer and CS Lewis. It’s no wonder that, lyrically, Soak Your Brain displays more interest in apologetics (the defense of the doctrine) than do most records. Let’s face it, there weren’t a lot of bands doing the hard rock/funk fusion that Extreme, and to an extent Kings X and Galactic Cowboys, did and the excellent musicianship of these three men, Soak Your Brain is an album that you can turn on 20 years later and won’t come across as dated because it is unique enough that it was never overdone or overplayed, so it sounds fresh every time it’s spun. Lovewar was every bit as talented as their counterparts, both musically and vocally. I think the Christian label may have hurt them as far as marketing goes but, even then, there is no chapter-and-verse Biblical quoting going on here, just strong, positive, uplifting lyrics about human relationships and social ideas. You’ll be proud to have this in your collection.” -Girder Records

On vinyl for the first time ever! Translucent purple version limited to 150 copies.

TRACK LISTING:
Side A
Soak Your Brain
Golden Rule
Take Me
Welling Up
Space And Time