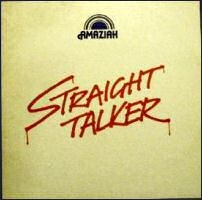 “This early British Christian hard rock classic was originally released in 1978 on an obscure UK custom label with boring cover art, but in 1979 it was re-released in Canada on the small indie Christian record label Tunesmith Records only on vinyl LP and cassette with a dynamic cover. It has never been re-issued since it went out of print in the mid 1980s, much less on compact disc. LP copies of that UK original issue, as well as a small pressing of the Tunesmith re-issue on red vinyl, are legendary rarities among serious collectors. Those with ears trained to appreciate heavy monster rock will find a real treasure here. A few progressive influences shine though on ‘Way, Truth, Life,’ but mostly just loud cranking hard rock with aggressive guitar, coupled with power synths and organ. Great stomping head banger riffs abound on the closer ‘He Is Lord.’ On the Born Twice Records series – Legends Remastered Volume One – you can hear this legendary release in digital format for the very first time, remastered by specialist J Powell of Steinhaus. As an added bonus, you can hear the post-album four track demo that showcases the new slightly punk-influenced direction of the new line-up. Everything is packaged in a beautiful 6-panel double-gatefold digipak featuring both the original custom release’s cover and the Tunesmith cover with the classic picture of the band (leopard skin and all!). It even includes a band biography to introduce the band to new fans! For fans of BTO, Aerosmith, Daniel Band, Barnabas, Nazareth and Deep Purple!” -Born Twice Records