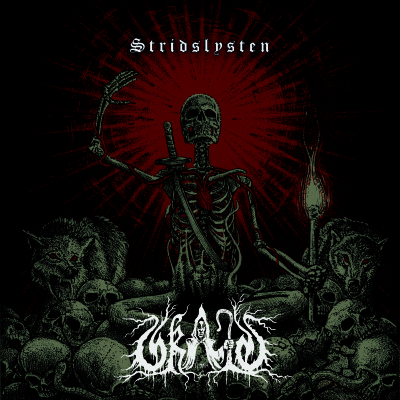 “This is Swedish furious black metal at its finest! After the EP 1260 Days released in 2015, these guys created a strong following with their anonymous identity. The members are keeping the mystery alive and have taken names such as Mund, Resh, Zhajiin and Heth. But is Skald In Veum a real band, you might ask? Well, their 2 first live-gigs at NordicFest in 2017 (Norway) and Elements Of Rock in 2018 (Switzerland) leave no doubt! Skald In Veum is not only a real band, but a band of fantastic performers. The music is fast and brutal harsh black metal, but with atmospheric parts also created by walls of heavy guitars. If you want to make music that sounds like a real hurricane, storms and thundering rain, you might get the idea. Oh… and did we mention it is incredibly fast? Musically, you can guess something in the veins of Dark Funeral, old Immortal, Watain or 1349. Lyrically, however, these guys have a serious message of misery, death and devestation pointing at repentance. Politically incorrect, religious critical and anti-upperclass.” -Nordic Mission

TRACK LISTING:
Stridslysten
As Wolves Among Sheep
En Lyra Döpt I Blod
Do What Thou Wilt
Goatwhore
Shards Of The Infernal Fall
Tvinsot (Siaren II)
Whoremaster