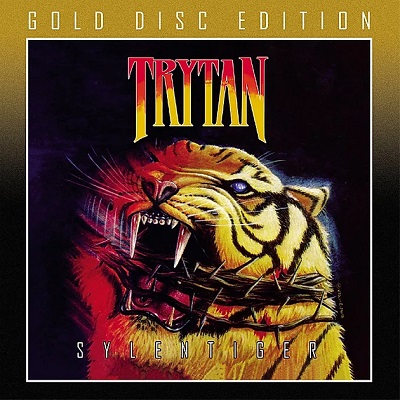 “After their 1987 spacey-prog rock and metal debut, Trytan came roaring back with Sylentiger in 1990 with heavier, proggier and more mature AOR/metal. Many thought Sylentiger to be a perfect combination of Rush meets Fates Warning. Thinking-man’s metal, Sylentiger has enough ideas to fill a recording twice it’s length. Here you’ll find Trytan’s most complex playing and Lary Dean really shows us what an all-commanding monster on guitar he really is! Many of his solos are brilliant ascending crescendos of intuitive genius! Dean knows his guitar better than most people know themselves, making his guitar an extension of his soul in a monumental flurry of magnificent notes. Robinson and Dobbs are right behind him, laying down a massive foundation of solidness that will withstand the test of time for Lary Dean’s soaring guitars! The combination of the three make an indisputable pinnacle of masterful talent! Turn your stereo up loud and buckle in as the sea of music that lies within Sylentiger is nothing short of a maelstrom of swirling notes. With both musical and lyrical content escalating into an all out assault on the ears and the mind, fans get to experience the fierceness of this remastered tiger like never before! The 30th Anniversary Edition will be re-issued as a Gold Disc Edition CD, remastered by Rob Colwell of Bombworks Sound.” -Retroactive Records

TRACK LISTING:
Take Cover
Deadly Masquerade
Beyond The Night
Star Bound
Make Your Move
Sylentiger
Here To Stay
Playing With Fire
Life Goes On
Waking The Giant
By My Spirit