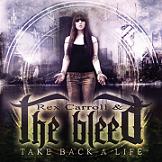 Rex Carroll And The Bleed

Take Back A Life (re-issue)

“Back in 1997, Rex Carroll (Christian metal’s reigning guitar hero) got together with former Lovewar vocalist and extraordinary talent Tim Bushong! They called themselves The Bleed and released an album called ‘Ouch!’ At the coaxing of their record label, they used silly fake names in the liner notes to purposely obscure the fact that it was them. Unfortunately, this poorly marketed album was quickly forgotten and has long been out-of-print. Almost 15 years later, Retroactive Records has yanked this 90’s hard rock gem out of the clutches of obscurity and made it available once again! The album has been digitally remastered (J Powell at Steinhaus), given all new artwork, re-titled and slightly renamed so you know the star power behind this stunning release! Rex provides his usual guitar heroics and Bushong puts in the best vocal performance of his illustrious career! If you enjoy Rex’s work with King James or bands like Lovewar, King’s X, Galactic Cowboys and Ty Tabor – this is a must-have release!” -Retroactive Records

TRACK LISTING:
These Shoes
Love Over All
Sake/Round The World
Hose Me Down
Let The Rain Fall Down
Me, My Orb, And Mine
Take Back A Life
Lies/That’s The Way Life Goes
Too Late (Time Has Come)
Stay The Same