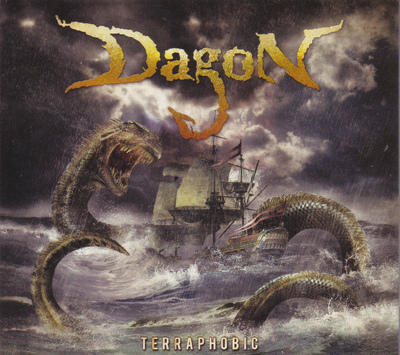 “Thrash and death rises up from the deepest depths of the sea in the tour de force of Dagon. Hailing from Lansing, Michigan, Dagon has been playing together for several years now, combining their infatuation with all things oceanic with their love of thrash, death and good ol’ 80’s rock and roll. Rising from the ashes of brutal metal band Bestiary, Dagon recorded an EP titled “Secrets of the Deep” which contained 5 songs of oceanic thrash anthems with brutal vocals and killer guitar leads. The EP garnered the interest of Bombworks Records, resulting in the band’s first full-length release “Paranormal Ichthyology” in 2006, which garnered positive reviews and helped continue to cultivate the band’s rabid fan base. “Terraphobic” sees the band’s song-writing maturing even further, with killer melodies and catchy yet complex lyrics, fantastic drumming, in your face bass guitar, slick duelling guitar leads and riffing and the trademark duelling vocals of Randall and Truck (featuring both Cryptopsy-esque gutturals and black metal shrieks). The CD was recorded at Random Awesome Studios, which has already recorded CDs for labels such as Facedown Records, Blood And Ink Records and Torque Records. In addition to 10 brand new amazing metal anthems, the band has re-recorded fan favorite “Feeding Frenzy” from their EP. The band draws influences from bands such as Dark Tranquility, Iron Maiden, Hypocrisy and Slayer and the music is carried by a thrash base with generous helpings of death, black and 80’s metal. Raise your sails, man the cannons and get ready to do battle with the minions of the deep with Dagon as your weapon of choice!” -Bombworks Records

TRACK LISTING:
Cut To The Heart
Demons In The Dark
Terraphobic
Wave Of Predation
To The Drums We Rise
Full Speed Ahead
Into The North
The Last
The Sea Encompassing
Feeding Frenzy
Ocean Metal