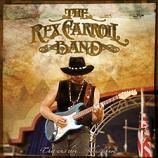 That Was Then This Is Now

“Like a lumbering freight train, The Rex Carroll Band got started slowly (they have been playing live shows since 2004) following the success of 80’s Christian metal legends Whitecross, where Rex established himself as a guitar virtuoso of epic proportions (2 Dove Awards and 5 consecutive HM Readers Guitar Hero Awards). But Rex grew up in the 70’s rock scene where he was profoundly influenced by blues and southern rock standouts like The Allman Brothers Band, ZZ Top, Stevie Ray Vaughn and Jimi Hendrix. It is with great joy that Retroactive Records releases That Was Then, This Is Now as the debut disc from this Chicago power trio that fuses Rex’s fierce guitar skills with soulful, imaginative and heavy blues. “Foolsgold” is a scorching guitar instrumental showcasing Rex’s axeman-ship full scale (ala Eddie Van Halen or Yngwie Malmsteen) and it serves as the perfect intro to the riff-heavy “Working Man Blues”. While this album will appeal to fans of Kenny Wayne Shepherd and Stevie Ray Vaughn, the mind-blowing, bluesy guitar heroics from start to finish establish The Rex Carroll Band as the choice band for those looking for air guitar inspiration! Get your leather vest and fire up your Harley Davidson because the blues tradition has just been elevated to a new level!” -Retroactive Records