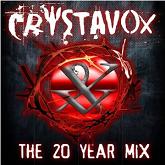 “The songs have been totally redone: new guitars, drums and an over-sampling method vastly increasing the mastered volume of each song to today’s standards, making for an optimal sound that brings these tracks straight in to the modern day. Disc two is a very special DVD release consisting of a recently discovered ‘never before released’ live concert footage and also several MTV-style video clips that have never before been officially released. All footage has had the color completely corrected and restored and has been completely remastered in the 16:9 format. In addition to all of this classic remastered video footage the DVD will also include a recently recorded “where are they now” segment shot in HD and featuring the band “self narrating” the story of Crystavox! For fans of Skid Row, Whitecross, and Motley Crue!” -Roxx Records

TRACK LISTING:
Disc 1
Cry Out
Break Down The Wall
Power Games
Stick To Your Guns
Sacrifice
Shame
Home Again
Paradise
It’s All Right (To Rock-n-Roll)
No Boundaries
The Big Picture
Snakes In The Grass