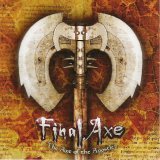 The Axe Of The Apostles

“In his review of this album, HM editor Doug Van Pelt writes ‘…those of you who remember Final Axe (who go all the way back to the late 80’s) will be glad to know that this is easily their best album. If Saint were to win ’Comeback of the Year’ for 2004’s In the Battle, then this album would win it this year.’ In fact, some might say that with The Axe Of The Apostles, Final Axe has captured heavy-weight status by showcasing their catchiest, most accessible set of tunes available yet. Even while retaining the precision guitar assault and the quasi-Rob Halford vocals, the band proves they are masters at being melodic, without losing any of their intensity and edge. In true metal form, The Axe Of The Apostles rarely gives you a chance to come up for air, displaying a real penchent for stadium ready anthems. Drums are handled by Christian metal icon Robert Sweet (Stryper), whose busy, virtuosic rhythmic base pushes Bill Menchen (guitar) and Simon Tyler (vocals) to their most energectic and impassioned performance of their considerable careers. With The Axe Of The Apostles, Final Axe provide us an album that truly towers above pretenders as the genuine article of heavy metal greatness.” -Retroactive Records

TRACK LISTING:
Heads Will Roll
Burn In Hell
Ball And Chain
Hangin By A Thread
Dealing With Death
Vengeance Is Mine
Slaves
Metal Missionaries
We’re Not Heroes
Worlds Away