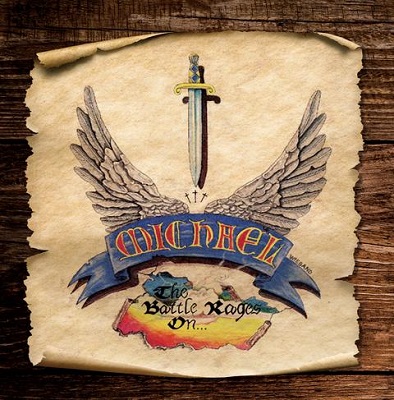 The Battle Rages On

“Every once in a while we get really lucky and find that gem of a classic Christian rock or metal album that never got its just rewards. Such is the case with our latest release coming to you by way of a long lost classic album from an artist simply entitled Michael with their only album ever released entitled ‘The Battle Rages On’. This extremely rare and very good Christian hard rock album from Michael was only ever released on cassette tape. A South Amherst, Ohio, based band, this was their only officially released album that originally came out in 1995 on a small defunct indie label called R.A.G.E. Records and in very limited quantities. Michael featured Shane Freeman (Jake Banshee) on vocals who was the former vocalist of Stutz. Also featuring the keyboard talents of Todd Waites (who would go on to play in Apologetix), Mike Slone on bass guitar and Dennis Raymond on drums. With solid operatic vocals and shredding guitars this album is reminiscent of bands like Stryper and Holy Soldier. Roxx Records is very excited to be bringing you this long lost treasure officially on CD for the very first time. This re-issue features all 12 tracks from the original cassette as well as 3 never before released live bonus tracks. This package has been completely remastered by Bombworks Sound and boasts an updated version of the original artwork with a killer 12-page booklet with lyrics and liner notes courtesy of No Life Til Metal Graphics. Limited to only a one-time 300 piece pressing this will become a collectors item.” -Roxx Records

Bonus Live Tracks
Lies
Generation X
You And Me