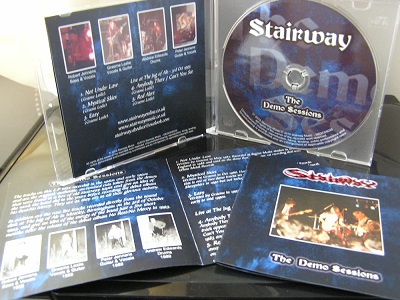 “STAIRWAY – THE DEMO SESSIONS features early Stairway demos from the 1980s and live tracks from 1993 – 6 tracks: 3 studio tracks and 3 live tracks, with a brief written explanation on each track. Don’t expect the latest quality – some were recorded 30 years ago – these are the original, un-remixed cuts taken directly from cassettes found in a box of STAIRWAY stuff. They are as they are, in all their glorious naivety! Limited to a small number of duplicated copies and comes in a slimline case with a 4-page booklet”