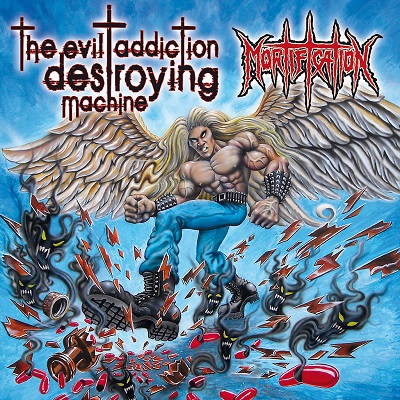 Continuing with our chronological release of Mortification albums on VINYL, Soundmass are happy to announce the LP release of “The Evil Addiction Destroying Machine”.

With releases on label giants like Nuclear Blast and Metal Blade, albums like “Scrolls Of The Megilloth” and “Post Momentary Affliction” which are considered classics, world tours and a sound that is constantly being reinvented, Mortification is a band that cannot be put in box. And they did it again in 2009 with “The Evil Addiction Destroying Machine”, breaking the pattern of the preceding albums by veering away from death metal towards a more mid-paced groove oriented sound, though still breaking into a thrash frenzy here and there. This brings back memories of some of their mid-era albums, but “The Evil Addiction Destroying Machine” – Mortification’s 14th studio album – most definitely has its own identity. For one, Adam Zaffarese returns to the band, bringing his superior drumming to Mortification. Steve Rowe’s bass playing is solid and prominent, maybe more than ever before given he wrote all the songs, and veteran guitarist Mick Jelinic’s fret work is a definite highlight. The result is 10 catchy and memorable songs – clean, energetic, heavy, sharp and not overproduced or repetitive. You’ll find yourself returning to this album again and again – there’s something here for all Mortification fans to enjoy.

13 years since its initial release, this is the first time “The Evil Addiction Destroying Machine” has ever been available on vinyl. Remastered for vinyl and with Troy Dunmire’s original cover artwork in full-sized splendour, this edition – a limited pressing of 200 copies on black vinyl – is a must for fans of this pioneering Aussie band and any true metal enthusiast.

TRACK LISTING:
Side A
The Evil Addiction Destroying Machine
The Master Of Reinvention
A Sense Of Eternity
Elastisized Outrage
One Man With Courage Makes A Majority