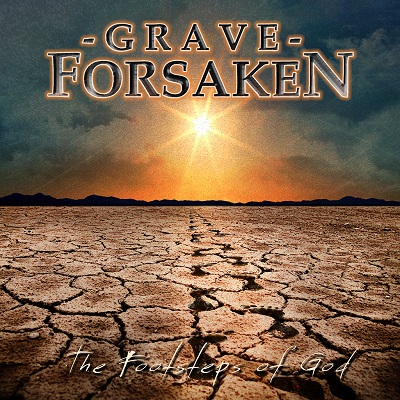 The Footsteps Of God

2020 has been a strange year, but if there’s one thing you can depend on, it’s the certainty that a new GRAVE FORSAKEN album is never far off. These four Aussie’s are always cooking up something new. When Grave Forsaken briefly reunited their original line-up in 2018 the plan was to record an album that harkened back to the early recordings. During the making of the album guitarist Elias Salmela made the decision to leave the band, paving the way for Luke Gallagher to return to the fold after a short absence from the line-up. Original Grave Forsaken members Vaughan Gregory, Matt Skipworth and Tim Steadman had recorded their parts when Luke came in and added his rhythm and lead guitar. The result is their impressive new album The Footsteps Of God. The band’s early classic metal influences are mixed with their later thrash metal stylings, so there is something for everyone who has enjoyed Grave Forsaken over the course of their 16 years. Everyone knows it wouldn’t be Grave Forsaken without prominent Christian themes and catchy metal tunes. Tracks such as “Warriors of the Cross”, “Calm in the Storm” and “Temple of Crucifixion” fit the bill perfectly, providing that unmistakable Grave Forsaken sound. Released by Soundmass and with cover art and layout by Scott Waters, this is an album that will bring a smile to all Grave Forsaken fans. Get your copy now!

TRACK LISTING:
Intro (The Footsteps Of God)
One True Way
Judges
Temple Of Crucifixion
The Ruskin Arms
Celebrity Judge And The Sinners Part IV
I Think It’s Time
God-Given Strength
Calm In The Storm
Warriors Of The Cross