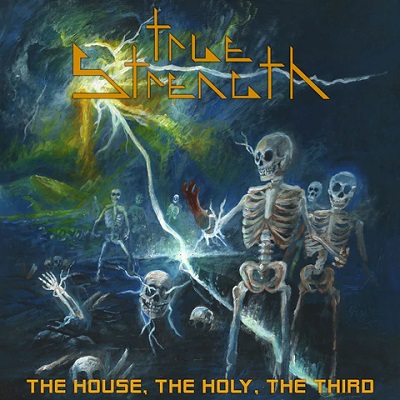 The House The Holy The Third

“The highly anticipated fifth full-length album from True Strength is coming to you via Roxx Records in 2022! Already being called one of the top albums of the year by one publication and named ‘Metal of the Month’ by another, “The House, The Holy, The Third” is one album that metal fans must get their hands on this year! Following up on their successful 2020 release “The Mighty Hand Of Yahweh”, True Strength has taken their craft to a whole new level, with many praising the production, songwriting and musicianship on “The House, The Holy, The Third”! This 12-song album features over 60 minutes of music filled with epics, instrumentals, ballads and pure heavy metal! “The House, The Holy, The Third” is a concept album based on the book of Ezekiel in the Old Testament. The events of the book are covered from beginning to end as faithful to Scripture as possible. The lyrics for each song derive from actual scripture in the book of Ezekiel! The album also features the amazing artwork of Ward Silverman (Topps Comics, Star Wars), who gives a haunting imagining of the Valley of Dry Bones chapter from the book of Ezekiel combined with a stunning CD layout by Scott Waters (NoLifeTillMetal)! This album is truly a labor of love and one that True Strength wants to share with all its beloved friends and fans around the world!” -Roxx Records

TRACK LISTING:
Arrival Of the Glory Of The Lord (Intro)
Chariot Of God
Ezekiel’s Call
Dwelling Of Abominations
Harlot Tride
Mourn Not The Delight Of Your Eyes
Judgement Will Come Against The Nations
The City Has Fallen/587 B.C.
The Lord Will Be Israel’s Shepherd (Instrumental)
Valley Of Dry Bones
Destruction Of Gog And Magog
The House, The Holy, The Third (John 2:19)