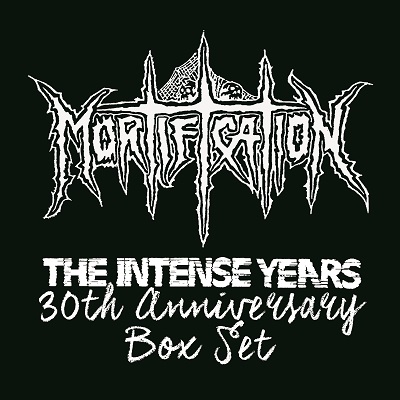 Soundmass is happy to present this 7-CD Box Set to celebrate the 30th Anniversary of the legendary MORTIFICATION! Housed in a black box and limited to 200 copies, it contains all 6 of their landmark releases on Intense Records as well as an exclusive live CD:

All 7 CDs come in digi-wallets – also known as mini-LP sleeves – and all of them (with the exception of Live 1996) include 12-page booklets with all-new layouts – alternate covers, lyrics, photos, flyers, articles and album histories written by Scott Waters (Ultimatum/NoLifeTilMetal). The CDs all contain bonus tracks as well, the majority of which have never been released before.

The Live 1996 CD – exclusive to this Box Set and never released before – was a sound-board recording from Mortification’s EnVision EvAngeline US Tour. It was recorded for consideration as an offical live release but never used.