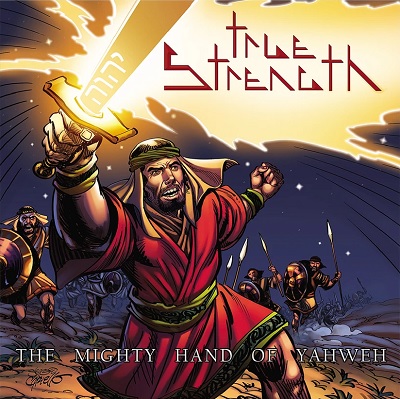 The Mighty Hand Of Yahweh

“This is the third album from True Strength on Roxx Records – we have been supporting these guys for many years now. This new album shows so much progress and some of the best work this band has done to date! If you want true Christian metal this is about as bold as it comes! This features some of the most amazing artwork as the cover was designed by legendary comic book artist Sergio Cariello (The Action Bible)!” -Roxx Records

“True Strength is honored to announce that their fourth full-length studio album
The Mighty Hand of Yahweh will be released on October 30th, 2020, through Roxx Records! This is a theme album based entirely on the Old Testament Book of Joshua. The events of the book are covered from beginning to end, as faithful to Scripture as possible. The lyrics for each song derive from actual scripture in the Book of Joshua! The album features the renowned American power metal vocalist George Tsalikis of Zandelle, in addition to songwriter, rhythm guitarist and bass guitarist Ryan “The Archangel” Darnell, newcomers Chris Lee Faulkenberry on drums, lead guitarist Takis Koroneos and Marco “Mark” Bravi on keyboards. The album was produced and mixed by Joshua DeHaan and the late Walt DeHaan, the former manager of Winger, who passed away during the production of the album.” -True Strength

TRACK LISTING:
Vision Of The Commander Of Yahweh’s Army (Intro)
Joshua
Sounding Of The Shofar At Jericho
Burning Of Ai
The Sun Stands Still Upon Gibeon
Five Kings Are Put To The Sword
The Southern Cities Fall
Blood-Soaked Waters Of Merom
Rest From War