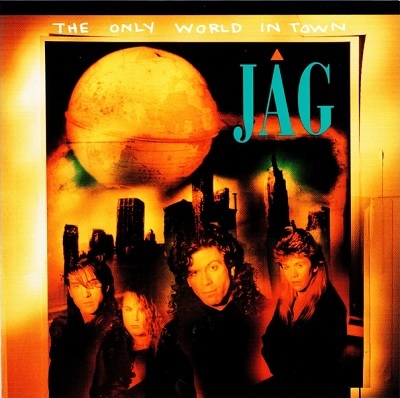 The Only World In Town (re-issue)

“The Only World In Town (1991) – JAG’s second album – was arena rock all the way. Even more importantly, the songs on this album have some significance. First, Billy, while touring Australia with Whiteheart, heard the hit song ‘Hands Up In The Air’ from the band Boom Crash Opera and worked with JAG to record it as the first song on the album. The song ‘Two Worlds Collide’ was going to be cut and recorded by the band Giant. Since Giant already had 14 – 15 songs for their album, John talked Billy into making it a JAG song. Dann Huff played all the guitars and it became the 4th song on the album. The idea for the song ‘The Only World In Town’ came from John’s 8 year old daughter: ‘We were driving along and I was talking about the monopolizing phone company, saying ‘They were the only game in town’. Then my daughter, who was in the back of the car, pipes up ‘Hey papa, this is the only world in town.’ The song looks at the way we are destroying this world of ours and speaks about the source of all the world’s problems, about how, until we get our hearts changed, the world won’t change.” -Girder Records

TRACK LISTING:
Hands Up In The Air
40 Watt City
What God’s Love Means
Two Worlds Collide
The Only World In Town
Sense Of Wonder
Mastermind
Somebody’s Watching You
The Last Time I Looked
Written In Stone