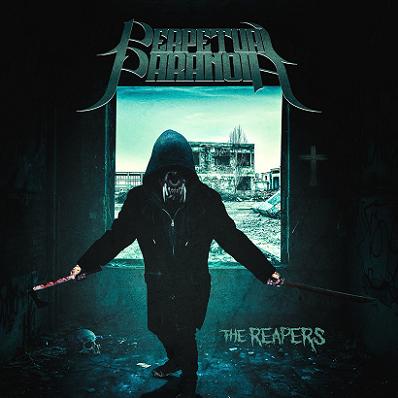 “Perpetual Paranoia is Dale Thompson, best known as the frontman of legendary Christian metal band Bride and The World Will Burn, and Brazilian Tiago James de Souza, an extraordinary musician best known as the guitarist of Bay Area thrash band Hand Of Fire! With Perpetual Paranoia, the band is unleashing pure metal mayhem! The Reaper specializes in blunt force trauma that magically transforms brutality into catchy! This is ultra-creative, aggressive heavy metal performed with both skill and precision. Dale’s vocals are more aggressive than anything he’s ever done, while never losing his signature sounds. Tiago is a guitarist’s guitarist – laying down tasty riffs and solos at an elite level. And while many aggressive metal bands are simply cookie-cutter copy-cats, Perpetual Paranoia utilizes double-bass to hammer home an album filled with progressive, passionate moments that keep the listener on the edge of their seat with a growing anticipation that is ultimately fulfilled. The Reaper strikes a signature balance between light and dark, beauty and repulsion, as the album progresses forward into the unfamiliar and formidable. Not one dimensional at all, multi-layered soundscapes dominate every song. Expect tons of time changes. Every song is a journey of thrashy aggression and darkness. The Reapers will be on many people’s best of 2018 list and – yes – it’s that good!” -Retroactive Records

TRACK LISTING:
Intro
The Reapers
Whatever It Takes
I Say Jesus
Your Sin Will Find You
The Veil
The God Syndrome
Romance X
Holy Ghost
Let The Dead Bury The Dead
Ten Thousand Saints
Dream Before The Nightmare