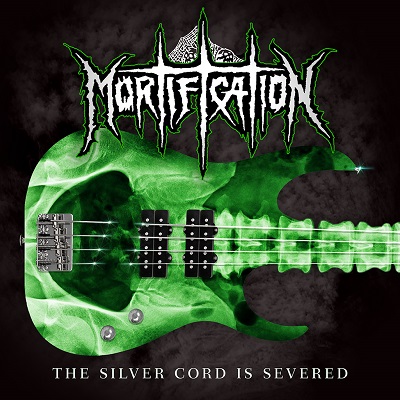 The Silver Cord Is Severed (VINYL)

Continuing with our chronological release of Mortification albums on VINYL, Soundmass are happy to announce the LP release of The Silver Cord Is Severed.

The Silver Cord Is Severed (2001), their 9th studio recording, continued the collaboration between Nuclear Blast (Europe) and bassist Steve Rowe’s own label, Rowe Productions (Australia). It also continued with their innovative hybrid of classic metal and thrash, with just a hint of death metal, as exhibited on the preceding albums – the riffs are solid, the melodies are catchy, there are tempo changes aplenty and the production is clean. As always, Steve is exceptional on bass and Lincoln’s guitar playing shines like never before, but what took this album to the next level was new drummer Adam Zaffarese. The son of Rosanna’s Raiders drummer Johno Zaffarese and still in his teens, Adam’s skills far exceeded his years.

20 years since its initial release, this is the first time The Silver Cord Is Severed has ever been available on vinyl. Remastered and with reimagined cover artwork, this edition – a limited pressing of 250 copies on black vinyl – is a must for fans of this pioneering Aussie band and any true metal enthusiast.

TRACK LISTING:
Side A
Metal Blessing
Access Denied
Hardware
Bring The Joy
Standing At The Door Of Death