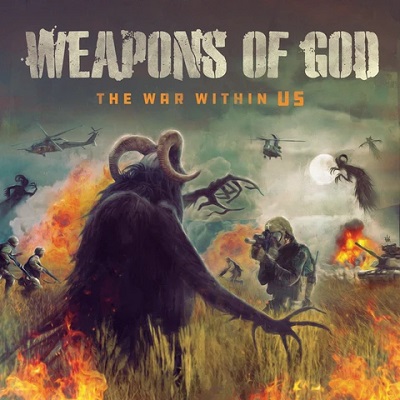 The War Within US

“Weapons Of God announces their return, bringing a new set of Jesus metal songs to fans with the release of their sophomore CD, The War Within US. The CD is a follow-up to their 2019 debut CD and is set to be released in September 2021. The members are Steve McGowan and Leon Black once again on guitars and sharing the lead vocals. Ed Girard is on bass guitar and Greg Alan on the drums. Weapons Of God are playing regionally and are frequently leading worship at the First Heavy Metal Church Of Christ in Dayton, Ohio. They recorded The War Within US in Dayton, Ohio, with engineer Ron Pease at The Refraze Studio. Pease has worked with other bands such as The Goo Goo Dolls, Nelson and ex-Megadeth guitarist Jeff Young. It is composed of ten new tracks including a heavy, crushing instrumental song to kick off the CD “Deep Wordless Knowledge”, the blistering, southern, dirty metal song “Give ‘Em Jesus”, the chaotic, driven force of “Isolate” and the powerful but mellow song “I Am With You”. Completing the CD are two bonus track re-recordings from the debut CD: “Anger” and “Weapons Of God”. While each song varies in tone, the songs are all originals and circle back to one universal theme. The War Within US is about the war and destruction of the world, the war within our country and the war within our minds. Hence, the US is capitalized in the title for the United States and for each of US for the personal and daily fight against the spiritual warfare of evil and its temptations and the rise and outcome in the end for the need of our Savior.” -Roxx Records

TRACK LISTING:
Deep Wordless Knowledge
War Within
Decline
Mary
Give Em’ Jesus
Children of the Light
Feign Dimension
Knights of No Tomorrow
Isolate
I Am with You