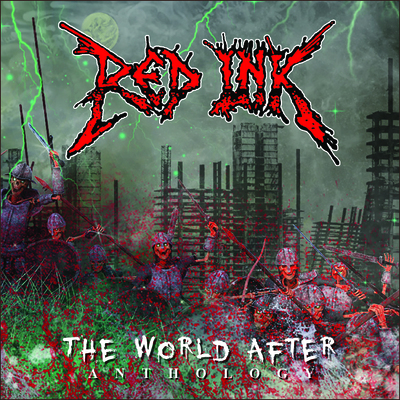 The World After Anthology

“Roxx Records is very excited to announce the release details of another classic Christian metal title that had been eluding us for years! Let’s thrash it up with this very cool title coming your way for the first time EVER on CD as we bring you this special collection from RED INK! That’s right, we are happy to announce that one of the Lone Star States best classic Christian metal bands RED INK has signed up with Roxx to release both of their classic demo tapes entitled ‘Raw Meat’ (1989) and ‘Brutal Recompense’ (1992). We are happy to be celebrating the 30th anniversary of that very first classic demo tape with the band! While looking for bonus tracks we learned the band had only ever recorded these two full-length demos! But Jorge and Ash would go on to record two songs with their next project called Mindkor that were originally written to be included on the third release from RED INK that sadly never came to be. We are excited to be able to include those two bonus tracks entitled ‘Apostacy’ and ‘Temples Of Ignorance’ on here to complete the whole RED INK catalog. All tracks have been remastered by Rob Colwell of Bombworks Sound and all new cover art, design and layout are courtesy of Scott Waters of No Life Til Metal Graphics. This will be a one-time special pressing of only 500 copies entitled RED INK ‘The World After Anthology’.” -Roxx Records