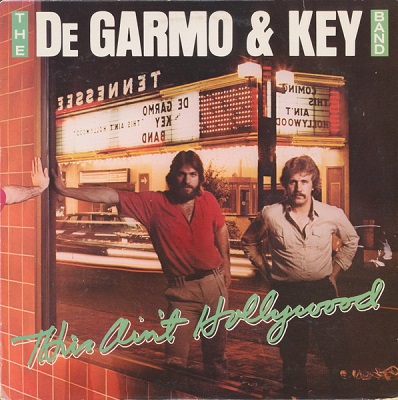 “The band’s third album This Ain’t Hollywood proved to establish a trilogy of classic albums that would stand the test of time. Featuring the opening “Stella, This Ain’t Hollywood” a plea to evaluate one’s values against eternal destiny, DeGarmo And Key prove to be passionate songwriters. The album also yielded two radio hits “You Gave Me All”, an infectious slow rocker that charted at #19, and the duet with Amy Grant on “Nobody Loves Me” which charted at #6 and led to DeGarmo And Key being a part of Amy Grant’s touring band. The album also features the hooky “Love Is All You Need”, co-written with rocker Mylon LeFevre who is also featured on backing vocals. Mylon would later record this song with his band when he was signed to CBS Records in 1987. This album also became the first Christian rock album to be nominated for a Grammy Award. Its timeless songs still pack a powerful punch of conviction wedded to a pulsating beat of rock and roll heaven.” -Girder Records

TRACK LISTING:
Side A
Stella, This Ain’t Hollywood
When He Comes Back
You Gave Me All
Never Be The Same
All Night