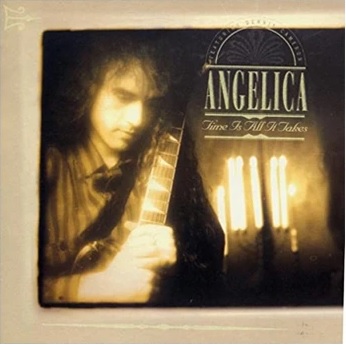 Time Is All It Takes (re-issue)

“Originally released in 1992 on Intense Records, the fourth album from Angelica might be Dennis Cameron’s shinning moment. Loaded with guitar shredding and melody, it’s almost to Angelica what Against The Law was to Stryper – musically their best album. Simply put, it’s an AOR masterpiece. Songs like the opening track Gotta Get Ready and Open Your Mind really showcase Dennis’s amazing guitar chops. This man flys all over the fretboard. The acoustic intro of Don’t Stop really proves, however, that Dennis is much more than a shredder. This album has so much rhythm and feel to it. Yeah, it’s melodic rock, but it’s pure music perfection from the melodic overtones of Time Is All It TAakes and I Can Hardly Wait To See, to the rockin’ tunes of Running Wild. It’s Angelica in perfect form. We originally remastered and re-issued the first 3 album and, after many requests, we are happy that this album has been given the Rob Colwell remastering treatment and – wow – is there a major improvement.” -Girder Records

TRACK LISTING:
Gotta Get Ready
Running Wild
Second Chance
I Can Hardly Wait To See
Open Your Mind
Don’t Stop
Time Is All It Takes
Carry Me