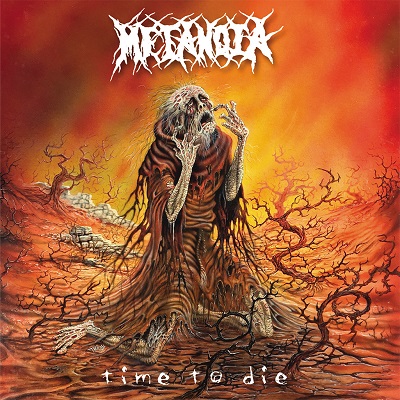 Time To Die was the 3rd album from METANOIA, following on from Don’t Walk Dead (1998). It was first released in 1999 on Rowe Productions, the label headed by Mortification frontman Steve Rowe.

Hailing from Queensland, Australia, this talented group was not your typical extreme metal band. They mixed a hefty dose of death metal with a smattering of black, thrash, classic, speed, punk and groove metal. Their innovative approach meant that they had their own unique sound, which was a breath of fresh air for metalheads in search of something different. It was a sort of groovy death metal – crushingly heavy riffs (à la Crimson Thorn or Cannibal Corpse) that were somehow also melodic and catchy. This is ultra-arranged metal – rhythm driven songs with cool riffs.

And then there are the vocals! Yowie’s low, low guttural growl is the deepest you’ll ever hear – it is truly unique. On this album he increases his use of menacing black metal vocals. The contrast between his rumbling growl and black screech take the Metanoia sound to the next level.

It could be argued that Metanoia found and perfected their sound on Time To Die. But, alas, it was to be their final album. The 2020 Soundmass re-issue of Time To Die has been remastered by Rob Colwell at Bombworks Sound.