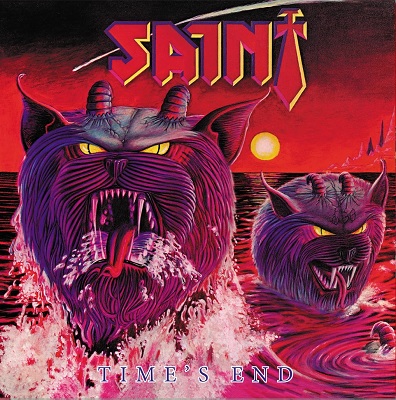 “On Heaven’s Metal Magazine’s Top 100 Christian Metal Albums Of All-Time, music critic Chris Gatto calls the dark, apocalyptic metal of 1986’s Times End a landmark release. With lyrics like “He wakes in darkness, the stench of burnt flesh fills the air, his chewed up body, the rats are crawling everywhere,” these songs became the anthems of a new generation. The artwork had demons rising from the sea and had many questioning if Time’s End was safe to listen to. The music inside was even more dangerous than the artwork – forceful, technical, filled with crunchy distortion and sinister guitar tones attached to unforgettable hooks. Thankfully, the answer was a definitive NO! Saint was dangerous and unsafe – acknowledging the real presence of evil and darkness in the world and directing us towards the light. Time’s End was nothing less than a metallic freight train that came out of nowhere and floored fans left and right. The album is still crushing metal fans daily in 2020, which is why this Retroactive Records re-issue offers elite packaging and an all-new remaster. This is THE definitive re-issue of this classic album – so “Don’t miss the end of the world, it’s the greatest show on earth, most everybody’s got their tickets, and they’ll really get their money’s worth.” First time on 180 gram vinyl with a full-color printed insert featuring lyrics, band pics and a write-up from bassist Richard Lynch. Remastered for vinyl by Rob Colwell of Bombworks Sound, this slab of molten metal wax will sound better than ever!″ -Retroactive Records

TRACK LISTING:
Side A
In The Night
Island Prisoner
Space Cruiser
Through You
Time’s End