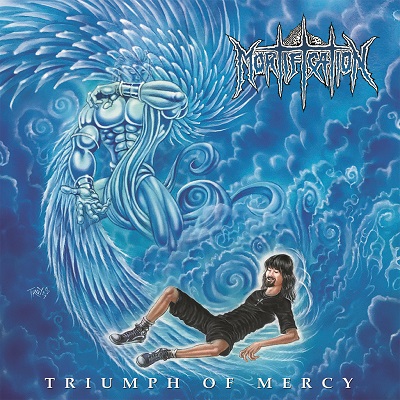 This 1998 album, their 7th studio recording, was originally released in unison between Nuclear Blast (Europe), Metal Blade (USA) and bassist Steve Rowe’s own label, Rowe Productions (Australia). Following in the footsteps of 1996’s EnVision EvAngelene, Triumph Of Mercy continues with their innovative hybrid of classic metal and thrash, with a hint of death metal. Everything is as it should be – Steve’s out-front bass interludes, Lincoln’s cool guitar solos, tempo changes galore, catchy melodies and well-structured songs. Lyrically, having almost lost his life to leukaemia and starting to write songs from his hospital bed, Steve sings about his miraculous recovery. For added value, we’ve also included 8 bonus tracks – 3 demos and 5 previously unreleased live tracks recorded during European tours.

Live 1998 is a quality sound-board recording from Mortification’s Triumph Of Mercy US Tour. Recorded at the same venue as Live 1996 (included in last year’s Mortification box set), this recording has never been released before. Fans of the band will love the intimacy of this live album, with Steve’s crowd interaction and characteristic storytelling, along with a few musical surprises.

Remastered and with Troy Dunmire’s glorious original artwork and a dual-cover, all-new layout, this 2-disc edition is a must for fans of this pioneering Aussie band and any true metal enthusiast.

TRACK LISTING:
Disc 1: Triumph Of Mercy
At War With War
Triumph Of Mercy
Welcome To The Palodrome
From Your Side
Influence
Drain Dweller
Raw Is The Stonewood Temple
Unified Truth
Visited By An Angel

Disc 2: Live 1998
Unified Truth
At War With War
Peace In The Galaxy
Mephibosheth
Drum Solo
Steve Talks 1
From Your Side
Welcome to the Palodrome
Influence
Steve Talks 2
Medley