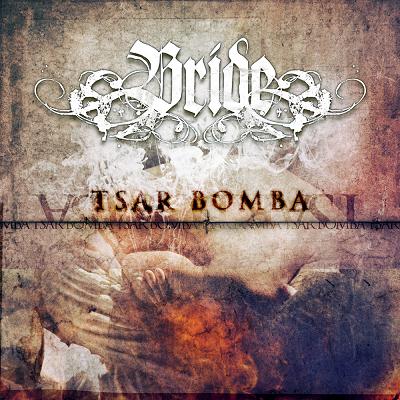 “Tsar Bomba is the nickname for the RDS-220 hydrogen bomb developed by the Soviet Union in the early sixties, the largest and most powerful nuclear device ever detonated. Tsar Bomba is also the title to the 2009 release from Louisville, Kentucky, based Bride, the group’s 13th full-length album. The album received the title Tsar Bomba because, in the bands own words, “It is the Bride CD to end all Bride CDs” and was intended to be the last Bride release ever. It was obvious the band wanted to go out with a bang! Bride’s 2009 magnum opus was an artistic triumph of epic proportions. Fans were treated to an entire album filled with metal anthem after metal anthem exuding grit, heaviness, guitar heroics and intelligence that wow’d both fans and critics. More than any other album, Tsar Bomba united fans of Snakes In The Playground with modern day Bride fans. Tsar Bomba was and continues to be the total package and that’s why it was a no-brainer when Retroactive Records was given the chance to re-issue it on vinyl for the first time ever! Because of vinyl time constraints some of the tracks from the original CD release have been left off, including those amazing classical transition pieces (get the CD!), but the 9 tracks remaining for the vinyl re-issue sound as if the album was always intended to be this way! #3 in the From The Vault Vinyl Series, this has a semi-limited packaging with a wrap-around jacket with a side spine that fits inside a resealable poly sleeve. Limited to just 150 units, do not delay in getting your vinyl copy of this essential Bride release! For fans of Guns ‘N Roses, Skid Row and metal with lots of bite!” -Retroactive Records

TRACK LISTING:
All We Are
Love Shine
We Are Together
When I Was A Kid
The Last Thing I Feel
Separate
Nothing Means Anything To Me
Downward
Never