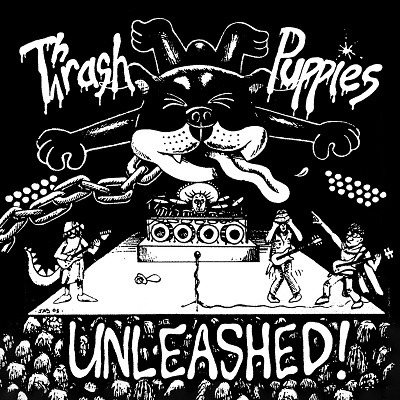 You may, or may not, need to be introduced to the THRASH PUPPIES. They originate from Melbourne, Australia, and the days of fanzines and trading cassettes in the underground metal subculture. The band played Aussie and New Zealand festivals and had songs on various compilation CDs. Ring any bells yet?

Soundmass is happy to be re-issuing “Unleashed!” – the one-and-only (cassette-only) Thrash Puppies release from 1993. They were a crossover band, of sorts, who very much had their own sound, but it’s no disservice to the band to say that if you’re a fan of One Bad Pig, then you will likely be a fan of Thrash Puppies. They played fun-oriented, punkish hard rock/metal, chock full of melody and catchy riffs. Despite the novelty (a rap, a little reggae, a bin solo…), this is quality music that holds up for repeated listens. Complete with silly names and outfits, their use of humour (including plenty of ‘90s Christian culture references) to spread a serious message will have you grinning from ear to ear.

The audio has been remastered by Rob Colwell (Bombworks Sound). Who let the dogs out? Thrash Puppies have been UNLEASHED!