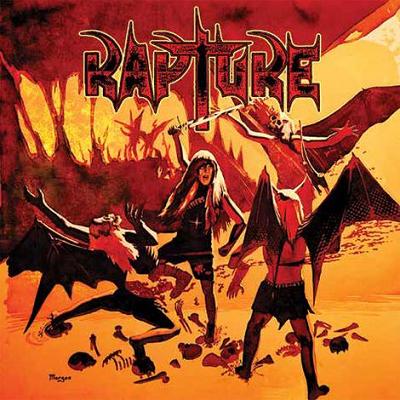 “A brilliant New Mexico band who toured with the likes of Testament and Overkill along with Vengeance, Believer and Deliverance – everyone thought Rapture would make it BIG! They had the look, they had the sound, they were professionals at their craft on every level. Yet every time the moment arrived to sign with a big label, it ended in disappointment. Fret not, dear thrashing metal heads! Retroactive Records has resurrected five essential Rapture demos from 1985 – 1997 that contain the essence of what made Rapture not just special, but elite heavy metal musicians. Yes, these are demos, so don’t expect million dollar production, but the sound quality is still exceptional for demos and you get the entire inside scoop written first hand as NoLifeTilMetal’s Scott Waters sat down with Rapture’s Paul Scazzafava to get all the details first-hand to share with you! The 2019 Retroactive Records 2-CD re-issue features tons of rare band photos, write-ups and a 16-page booklet housed in a jewel case that make this set a collector’s dream. Expect a sound very similar to bands like early Deliverance, Metal Church, Anthrax and Testament – those almost Geoff Tate-like high clean vocals mixed with traditional power metal and crunchy thrash. The band would later change their name to The Moshketeers. Limited to just 500 copies pressed!” -Retroactive Records

TRACK LISTING:
DISC 1
Rapture Demo (1985)
Death By The Sword
Make Your Move
Last Chance
As You Are
Garden Of Gethsemane