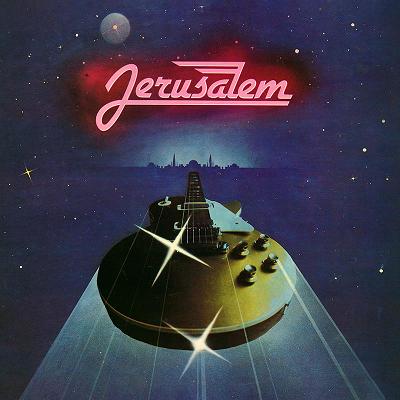 “It all began in 1975 with an old bus bought from a surplus stock at the Swedish Telecom. It was a miracle they even got out of Gothenburg. The water leaked out of the bus very quickly. Sometimes on tours they had to stop in the middle of nowhere and the guys had to wade in swamps to get water for the bus. But that didn’t diminish their enthusiasm. Every second weekend they took all the equipment and went on tour. The mission was to tell young people about God in clubs, discos, schools. They did all this in the face of heavy resistance. Being the first Christian hard rock band in all of Europe was difficult. Hard rock was connected to drugs, aggression and Satanism. Furthermore, the music was ear-splitting! Jerusalem endured a lot of criticism. They weren’t welcome at all at some churches. Smoke-bombs, long hair and a stage stockpiled with professional musical gear was more than some people could accept, even if Jerusalem radically proclaimed Jesus. But Jerusalem were full on Jesus freaks, and they could not be stopped! 1978 saw the release of Jerusalem’s debut record Volume One and in just a few months the record sold 30,000 copies! Jerusalem reached far outside the church walls, drawing both believers and non-believers. It was originally released with Ulf Christiansson singing in his native Scandinavian tongue. Fortunately, some Americans attended Greenbelt Festival in the UK and brought Jerusalem records back to the USA and a copy ended up in the hands of Resurrection Band’s future-icon Glenn Kaiser. Glenn got that record into the hands of Lamb And Lion Records legend Pat Boone who ended up introducing English-singing Jerusalem albums to the masses in the USA! The lyrical depth, the recording quality and the searing riffs stand out on Volume One. These are elite songs dripping in passion and vitality that hasn’t lost any of its charm since 1978! “High Tide”, “Mr. Ego”, “Neutral,” etc. alone explain how this is the pivotal album that pierced through the hearts of fans across the globe which gave the band a foundation that birthed many years of international touring. Jerusalem was the real deal and anyone who listened to this album knew it. Unfortunately, the Jerusalem debut release never got a proper CD re-issue in English until now. With several compilations having songs from the album, this Retroactive Records 40th Anniversary Edition is the first time the album has been re-issued on CD in English featuring all the original songs. This Rob Colwell (Bombworks Sound) Legends Remastered version adds so much warmth, depth and sonic clarity to perfection. Retroactive Records has packaged this gem in a jewel case with a 12-page insert featuring band pics and lyrics. Great pains were made to make sure this classic was given the full re-issue treatment, knowing Jerusalem fans have waited 40 years for a proper CD re-issue. Well, here you have it! For fans of Deep Purple, Bad Company, BTO, Resurrection Band, Daniel Band, Barnabas and Nazareth! In 2015, Classic Christian Rock Zine voted this album the #9 best Christian rock debut album of all time!″ -Retroactive Records

TRACK LISTING:
Noah
Jesus Is The Most Fantastic
Maybe
Daddy Who Has Made
Mr. Ego
Come To Me
If You Only Care To Listen
Neutral
Days Passing By
What If Jesus Is Right
High Tide