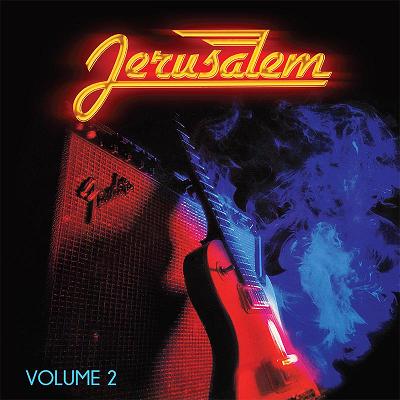 “With the release of Volume Two (1980), Jerusalem matured and took significant strides forward as musicians. The recording depth of this second album sounds as if it was recorded in a high dollar studio with each instrument and vocal perfectly placed in the mix for maximum clarity and sonic depth. From the beginning track “Wake Up”, Jerusalem sound like a real rock band and Volume 2 becomes a momentous stepping-stone for believers who like their music played at full volume! This is full-throttle Jerusalem with tracks like the epic sounding “Gethsemane” and the 8-minute track “Introduction” showing the band’s progressive edges. Jam packed with hit song after hit song, the album sounds like it could be a Greatest Hits album! Volume Two is worthy of the elite spot it holds in the hearts of late 70’s/early 80’s hard rock fans! Volume Two never got a proper CD re-issue in English until now. With several compilations having songs from the album, this 2018 Retroactive Records re-issue is the first time the album has been made available on CD in English featuring all the original songs! This Rob Colwell (Bombworks Sound) Legends Remastered version adds warmth, depth and sonic clarity to perfection. Retroactive Records has packaged this gem in a jewel case with a 12-page insert featuring band pics and lyrics. Great pains were made to make sure this classic was given the full re-issue treatment, knowing Jerusalem fans have waited decades for a proper CD reissue. Well, here you have it! For fans of Deep Purple, Boston, Bad Company, Resurrection Band, Daniel Band, Barnabas and Nazareth!″ -Retroactive Records

TRACK LISTING:
Wake Up
Rock-N-Roll
Love Song
Gethsemane
I Depend On You, Jesus
Introduction
Dialogue (Between One Person)
By By World
A Flower