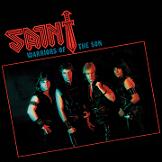 “Warriors Of The Son is the 1984 six song debut release of the legendary Christian metal band Saint. The band broke into the infant Christian metal scene at a time when Christian metal heads had very little to choose from and were looking for anything that was even close to quality. Some bands had the sound (Daniel Band) and some bands had the look (Stryken) but finding a Christian metal band that had the sound and the look was almost impossible! When Saint burst on the scene in 1984 metal fans were treated to amazing metal songs coupled with a fierce metal look that would please the most diligent Judas Priest fan! Warriors Of The Son was originally released on the indie label Rotten Records, then picked up by Morada Records. This 2011 Retroactive Records release is packaged in a 6-panel digipak faithful to the original vinyl six track release and includes a digital remaster that will knock fans off their feet! These songs have never sounded better (nor will they!) Retroactive Records even includes exclusive liner notes from band leader Richard Lynch! Enjoy this Christian metal classic now more than ever! For fans of Judas Priest, Black Sabbath and Iron Maiden!” -Retroactive Records