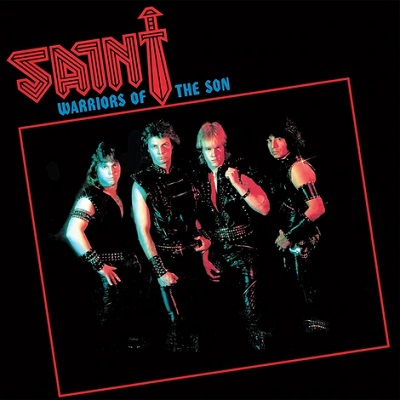 Warriors Of The Son (VINYL)

“Scraping together $1000 and recording in an 8-track studio, Saint produced Warriors Of The Son, a raw platter of American-style NWOBHM. Notable was the (more than obvious) comparison to British metal brethren Judas Priest as vocalist Josh Kramer could have been Halford’s twin. Give Saint kudos for moxy as Warriors of The Son was as bold as it was rough-hewn and unpolished. Better than average scores for Saint for taking their best shot with limited resources and then hitting it big. Call it an exercise in faith. The album now lives in revered cult status amongst fans of heavy metal. The album is finally available in heavy-weight random color vinyl, featuring two covers (Morada and Rotten Records) and an insert that serves as the normal back cover to the album. Remastered for vinyl by Rob Colwell of Bombworks Sound, this vinyl re-issue adds 3 live bonus tracks from the Live ’05 album, bringing the album to an impressive 9 tracks! Limited to just 200 copies – do not delay!” -Retroactive Records

TRACK LISTING:
Side A
Plan 2
Legions Of The Dead
Abyss
Warriors Of The Son
Vicars Of Fate