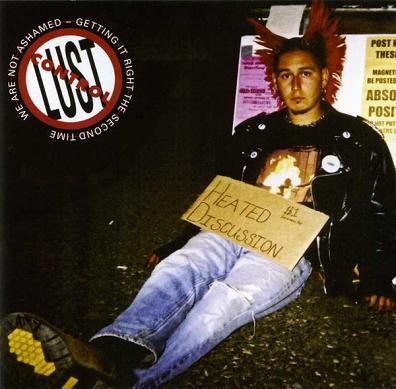 We Are Not Ashamed: Getting It Right The Second Time (Ltd. Ed. re-issue)

“Birthed at Cornerstone Festival ’89, the members of Lust Control were forced to keep their identities a secret because Paul Q-Pek and Philip Owen were already members of the popular metal band One Bad Pig. That being said, the real force behind the band was always HM editor Doug Van Pelt. Although proud of the musical output, Doug was never happy with the mastering and packaging of the original release and this time he was able to get it right the second time around! Originally released in 1992, in 2006 fans are treated to a whopping 18 bonus tracks, including an 8 minute audio commentary track from thrash master HM editor Doug Van Pelt. The entire ‘This Is a Condom Nation’ album is also included in stereo for the first time ever on CD! The band made a name for themselves with their controversial lyrics, which were always over-the-top in humorous and disturbing ways! Lust Control takes on such topics as deliverance, grace, masturbation and virginity. Musically, Lust Control roar through 17 art-thrash tunes (and that’s just on ‘We Are Not Ashamed’!) with stun-gun guitars and fuzz bomb bass. Taking their punk/thrash metal hybrid seriously, you’ll find the kind of passion and influence found in such classic bands as Suicidal Tendencies, Black Flag, Overkill, D.R.I., M.O.D. and S.O.D. Enunciated bark vocals, gang shouts galore, workman-like guitar solos and enough melody to make the songs memorable are only a few of the discs many qualities. The adrenaline charged arrangements feature perfectly placed tempo arrangements that move from blue collar thrash to circle pit forming breakdowns, resulting in an album that you’ll want to hear from start to finish every time you push play!″ -Retroactive Records