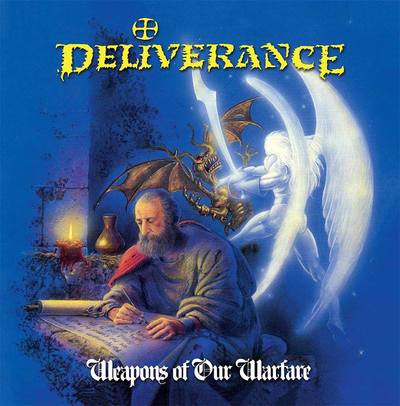 Weapons Of Our Warfare (VINYL)

“Only a year after the band released the historic Self-Titled debut, the band released their 1990 tour-de-force Weapons Of Our Warfare. Metallica created Master Of Puppets, Slayer bludgeoned the world with the classic Reign In Blood, Flotsam And Jetsam had Doomsday and Exodus boasted Bonded By Blood – all albums that would create the standard for all other speed metal releases. Weapons Of Our Warfare was that album for Deliverance. It cemented the band’s place as iconic speed metal royalty. To this very day, Weapons is still mentioned with hushed reverence among Christian metalheads as one of the elite speed metal albums of all time. Guitarist Glenn Rogers had exited the band and former Recon guitarist George Ochoa had joined in his place. Weapons Of Our Warfare turned out to be one monster of a record, a genuine speed metal classic. Each and every song is played with a feverish fury and once again the song-writing is outstanding. Since 1985, lead vocalist and rhythm guitarist Jimmy Brown had been crafting some of the tastiest techniques for complex rhythms and highly technical rhythm guitar. Brown’s guitar mastery drives the album from start to finish, setting new standards of power, precision and stamina. The album shows marked musical growth with several adrenaline-driven, extended, multi-sectioned compositions foreshadowing the band’s later progressive epics. And the trade-off guitar leads by Brown and Ochoa provide first rate riffage that will satisfy even the most skilled Guitar Hero addict. A video version of the title track became the first Christian metal song to gain airplay on MTV and it placed among the top three on that network’s Headbanger’s Ball countdown for twelve weeks in a row! In 1999, Lars Ulrich (Metallica) hosted a show in which he named Weapons as one of his top ten favorite metal videos of all time. Weapons Of Our Warfare (The Originals: Remastered) takes all the magic from the original release and magnifies it! Featuring a digital remastering, Ysidro “Sid” Garcia at Sight 16 Studios worked hard to make it sound substantially better than the original, while still keeping the character of it. The 180 gram yellow vinyl and the redone 2-sided insert will delight D fans into a thrashing frenzy. Limited to just 300 copies, don’t miss out on this deluxe gem!” -Retroactive Records

TRACK LISTING:
Side A
Supplication
This Present Darkness
Weapons Of Our Warfare
Solitude
Flesh And Blood