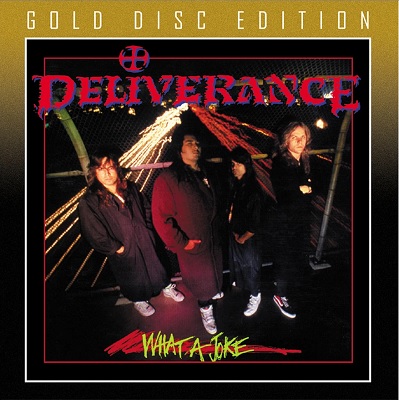 What A Joke (Gold Disc Edition)

“Originally released in 1991, Deliverance’s third album is a thrash masterpiece along the lines of S.O.D., M.O.D., Sacred Reich and Death Angel. Few are free from their lyrical mockery, be it profiteering doomsday preachers, goofy fundamentalists who hate metal because of the sound, skeptics/atheists, the Roman Catholic church, American politicians or even the whole of American society. Naturally, they’ve opted to mock just about every type of person who wouldn’t likely be at one of their live performances, so the approach is a tad safe, though nevertheless eloquent and effective when compared to much of the marble-mouthed rambling that can infect politically charged or humor-based thrash lyrics. This album resulted in some of the most unique and interesting work in the band’s catalog. Where before the songs were all serious subject matter and thrash played to perfection, What A Joke saw the band taking themselves and their music a bit less seriously, showing the fun side of metal and taking on topics that could be handled with more humor and still get the message across. Classics like It’s The Beat and Purgatory Sandwich With Mustard see Jimmy and company tackling topics other bands may have seen as taboo, thus this album remains an important piece in the Deliverance catalog. The 2020 CD re-issue includes all the original tracks, plus one 2014 re-recorded version of the song What A Joke (including George Ochoa). Everything has been digitally remastered by Rob Colwell of Bombworks Sound. It comes on a Gold Disc in a jewel case and a 12-page insert with lyrics and excellent band pics. Limited to just 1000 units, get this classic while you can! For fans of classic, elite thrash ala Metallica, Slayer, Suicidal Tendencies and M.O.D.” -Retroactive Records