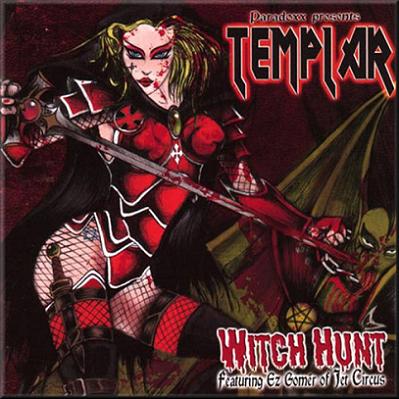 Soundmass is pleased to release “Witch Hunt” by Templar. Not for the faint of heart, Templar is a guitar-driven darkwave metal project of Western Australian band Paradoxx, finally manifesting their musical ideas deemed unsuitable to Paradoxx’s dark nu-electro sound. Guest appearances on the CD are made by Ez Gomér (Jet Circus Torbjörn Weinesjö (Veni Domine) and Jani Stefanovic (DivineFire). The packaging will be sure to get your attention with its comic/hammer horror vibe, so grab a copy now!

“Militia and her knights wage war on Azazel’s hordes… Witch Hunt is pure fantasy about good verses evil – satanic evil: spirits of witchcraft, sorcerery, shamanism, etc. It is a way of explaining the famous verse “We wrestle not against flesh and blood, but against spiritual forces…” without sounding too cliché. As for our heroine… well, Satan deceived Eve – now it’s pay back. The theme of the artwork is aimed at the goth, metal, comic book, cartoon fantasy gamer subcultures. Anyhow, we hope the music speaks for itself…” -Templar