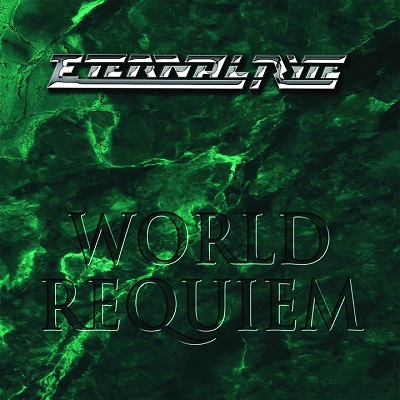 “Flash back to the late 80’s and early 90’s in Southern California where the Christian metal and glam scene were going strong! This classic Christian metal band was out there doing their thing and should have made it much bigger than they did. This time Roxx gives the special remaster treatment to the one-and-only Eternal Ryte as we bring you the bands debut and only full-length release ‘World Requiem’. ‘World Requiem’ was originally released in 1990 and was produced by legendary producer Cesar Kalinowski and it was an instant classic to the Christian metal community. Alas, the band would never record a sophomore release and would head off into Christian metal obscurity after this amazing debut, but we are bringing it back to life for a new generation. This historic piece of Christian metal history will be released on vinyl for the very first time ever! And it is being released as a part of the Roxx 100 Series where we focus on obscure indies and release them exclusively in a 100 piece format. Yes, only 100 pieces of this will be pressed on beautiful black 180g vinyl. In our usual pattern, we used the now legendary duo of Rob Colwell (Bombworks Sound) and Scott Waters (NoLifeTilMetal Graphics) to remaster and design this one in to a beautiful collectors piece.” -Roxx Records

TRACK LISTING:
Tightrope Dancer
Requiem
Someone To Love
Say Hello
The Killer
Surrender
On The Line
You And Me
The King
No More Lies